The Igbo socio-political organisation, Ohanaeze Ndigbo Worldwide, has placed $50,000 (N22,750,000 at N455 per dollar) on the notorious Finland-based self-acclaimed leader of the Indigenous People of Biafra, Simon Ekpa.

In a statement issued on Tuesday, January 24, the secretary-general of Ohanaeze Ndigbo, Okechukwu Isiguzoro, said the bounty placed on Ekpa has so far received a positive response from Ndigbo and Nigerians in Finland and in Europe.

Isiguzoro also noted that Ekpa will soon be arrested by appropriate authorities and repatriated to Nigeria in due time.

“It’s a matter of time, Simon Ifeanyi Njoku Ekpa will be apprehended, and his extradition to Nigeria will happen shortly so that he can answer all the allegations against him. “Ohanaeze Ndigbo Worldwide has cautioned one Simon Ifeanyi Njoku Ekpa to return the funds he collected with the evil intent to destroy the prospects of the Labour Party to win the 2023 Presidential elections on 25th February 2023.”

Also accusing Ekpa of making moves to frustrate the efforts by all stakeholders to ensure a credible and violent-free election in the southeast, the Ohanaeze Ndigbo said the Finland-based terrorists had collected money to deliver on his antics.

Isiguzoro further noting that the 2023 general elections must hold in the region assured that Ndigbo must vote for whoever is their choice at the polls.

“Intelligence reports have it that Simon Ekpa became frightened that his secrets have been uncovered and he quickly retreated and withdrew his response to the $50,000 bounty placed on him and has been begging Ohanaeze Ndigbo in the last 24 hours through the third parties to reconsider and review the sanctions as well drop the bounty placed on him. 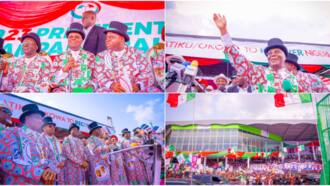 “Ndigbo’s response to Simon Ekpa’s plea is that he should return the $1 million to the disfavoured and unpopular presidential candidate, he must quickly return all he had collected (to his paymasters) in other to destroy the support base of Peter Obi through his old-fashioned mantra of NO ELECTION IN BIAFRA Land, the statement declared.”

Finland-based terrorist, Simon Ekpa, had earlier been identified as the main sponsor of terrorism in southeast Nigeria.

The prominent Igbo group, Ohanaeze Ndigbo has asked the federal government to arrest and repatriate him to Nigeria.

Ekpa has been masterminding violence of unlimited proportions on the people of the southeast from his base in Finland.

On his part, the 2023 presidential flag bearer of the Peoples Democratic Party, Atiku Abubakar has said that the sit-at-home order in the southeast cannot continue to be observed by the people in the region. 2023 Elections: Kwankwaso Reveals What He’ll Do if He Doesn’t Become President

Atiku promised that once elected into office as president of Nigeria, he will ensure that all contributory factors to the Biafra agitation in the region are addressed.

The former vice president also noted that the continued destruction of people’s businesses for failing to observe the sit-at-home is hurting the region’s economy. Great news! We (The Sharks Quiz Ghana) have signed an agreement with the Singapore International Mastery Contest Center (SIMCC) to have students in Ghana partake in their Olympiad examinations. This means that students from Grade 2 (Class 2) through to SHS 3(Grade 12) have the opportunity of taking the Olympiad exams in Math, ICT and…

Calling your crush or sending them a text message always feels a bit challenging. What if they don’t like you? While such conversations can go quite smoothly in your head, the reality often tends to be surprisingly different, especially if you use the wrong pick up line. Luckily, we have come up with a list…

Suleika Jaouad is a 33 years old American writer, advocate, and motivational speaker who won an Emmy Award for her New York Times column ‘Life, Interrupted.’ Born in New York, the United States, on the 5th of July 1988, Jaouad is the author of Between Two Kingdoms, the instant New York Times bestselling memoir, and…

The Labour Party standard-bearer, Peter Obi, has again been brought to the lowest level following the statement of APC chieftain, Chief Femi Fani-Kayode The former aviation minister in a recent interview disclosed that Obi has no hope even in hell, regarding the 2023 general elections Fani-Kayode, who is one of the spokespersons of the APC…

Nollywood actress Juliana Olayode aka Toyo Baby shocked Nigerians after she shared a post highlighting one of her struggles in life The movie star who has chosen to e celibate said she is considering marriage so that her body will stop punishing her Toyo Baby also added that she has been going through a lot,…